"Bisexuality is a hard thing for people to wrap their heads around. Why do we have to put ourselves in boxes because of who we want to be with? Shouldn't it just be about the person?"
—Jude to Callie

The Coterie[1] is the second episode of Season 1 of Good Trouble. The episode aired on January 15, 2019.

The residents of the Coterie throw an epic party, which Jude attends. Callie puts aside work for one evening to finally let loose and enjoy herself, but will it put her job as a law clerk in jeopardy? Meanwhile, Mariana tries to make friends with her new co-workers since she still feels like an outsider. Alice gets some upsetting news about her ex-girlfriend, Sumi, while Malika is confronted by her foster care past.[2] 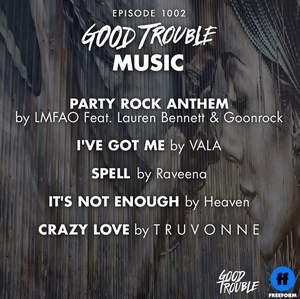 Retrieved from "https://thefosters.fandom.com/wiki/The_Coterie_(episode)?oldid=93276"
Community content is available under CC-BY-SA unless otherwise noted.